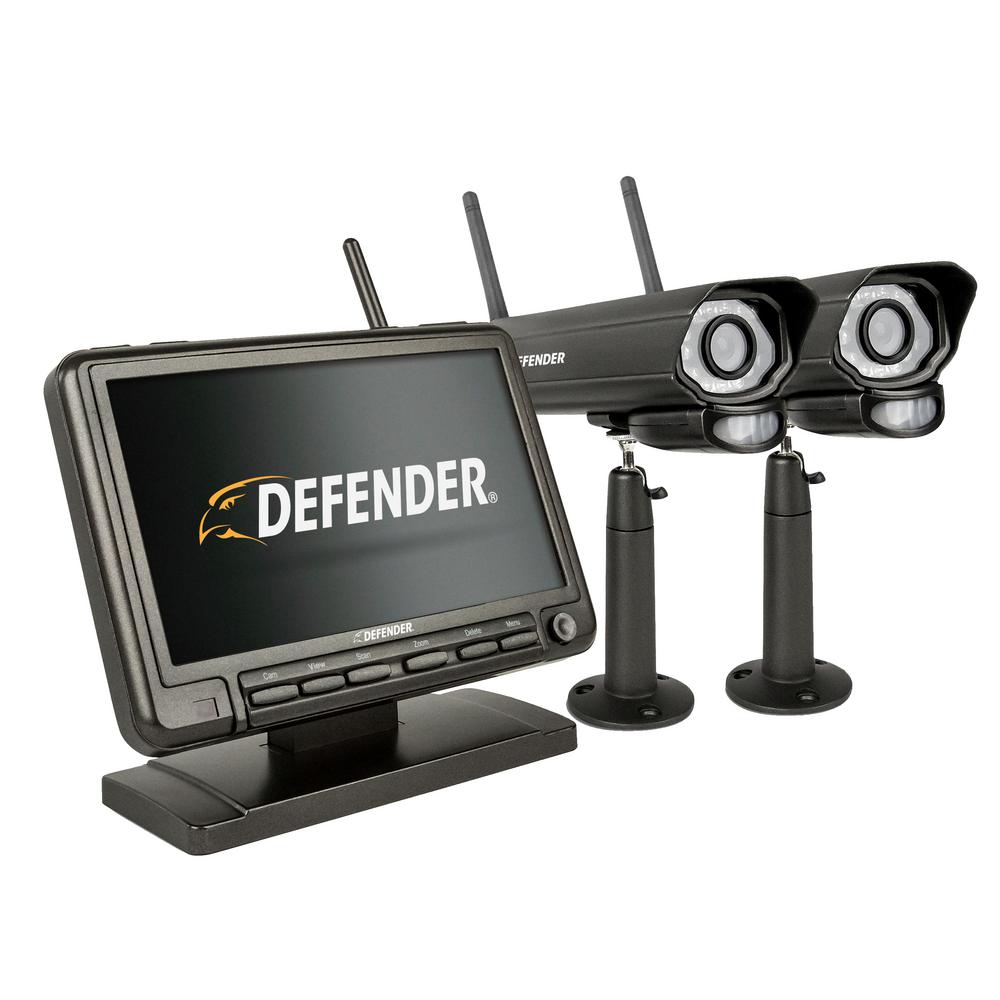 The Defender Digital Wireless Security Camera System with 7″ LCD Monitor is a reliable measure for ensuring the safety of your home or store. Set up is easy, thanks to the use of digital wireless technology. For the user’s convenience, SD cards are employed for recording purposes. It has a long range night vision function and even 2-way-intercom. The system can also be used indoors or outdoors. This motion detecting system can also be expanded up to 4 cameras. It garnered a reputable score in Amazon of 4 out of 5 stars, making it a very preferable choice among most wireless security systems in the market.

Package comes with a 2GB SD card which can be used to capture up to 350 minutes of video surveillance, including audio.

Built-in microphone for a 2-way intercom, allowing the surveillance team to communicate with other employees or visitors.

Comes with a 7-inch LCD monitor for reviewing your footage with convenience and clarity.

Critics, customers and reviewers generally found the Defender Digital Wireless Security Camera System with 7″ LCD Monitor to be a reliable piece of surveillance equipment that could prove to be useful. It got a great 4 out of 5 star rating in Amazon, so you know it’s good. While there are undeniably many reviewers who stated something negative about the product, they would quickly say that these really don’t overshadow the positive things that make the Defender a choice that you should make.

First of all, many reviewers say that the camera gives a decent enough image for securing the premises. With it, you can instantly recognize someone you know as they step into view. Customers loved the fact that you could set the system easily, because you barely have to work with wires, thanks to the wireless technology. Upon finishing the wireless set up, syncing them together is very easy and the technology transmits well for even as far as 100 feet. An added convenience, one reviewer said, was working with SD cards, as they are very affordable and could be brought anywhere. One SD card is already included in the package, which can capture up to 350 minutes of footage.

A lot of people were skeptic of the night vision capabilities, but most customers were surprised that it works well, and this is thanks to the infrared lighting provided for by the camera. At nighttime, you will be able to clearly view objects at up to 40 feet.

However, some reviewers stated that the monitoring station menu is not quite comprehensive and takes some time in order for users to get used to it, which is a shame, because it pulls down the ease of setting the camera up quite considerably.

Overall though, the pros of the Defender Digital Wireless Security Camera System with 7″ LCD Monitor definitely outweigh the cons, and this is a reasonably priced product for all the features, not to mention security, you’d be getting. Thanks to the wireless capabilities, the clear night vision footage, 2 way intercom plus the 7-inch LCD, the Defender is a great video surveillance system that you can set up for your own home or store.