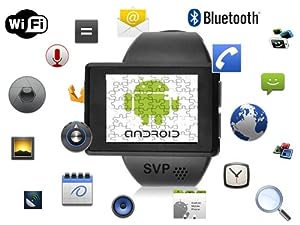 Convenience wise, having a smartwatch that works independently of a smartphone is useful, and it does all the things a smartphone can, such as browse the internet, send and receive emails, check social media updates, and is even able to make phone calls.

This smartwatch is packed full of technology, and is a stand alone device, meaning that it is one of the most advanced smartwatches on the market right now.

The SVP smartwatch offers everything you need to stay in touch with the outside world, and more. The device is bluetooth compatible (and comes with a bluetooth headset), and with WiFi, so the smartwatch connects easily to the internet. The watch works as a stand-alone device, which means that it does not need to be paired with a smartphone to read emails, browse the internet, or check social media. The device also works as an independent cell-phone: just insert your SIM card, and it is ready for action (the watch is unlocked, meaning that it works with any SIM card, worldwide) . The smartwatch also has an in-built speakerphone.

As well as staying connected, the watch is also geared up for entertainment: it has a video recorder, camera and  Mp3; you can even watch YouTube. There is also a dedicated apps store, with the G-Sensor and GPS providing accurate data, wherever you are.

Lots of RAM and storage

Sound quality on speaker-phone is poor

The appearance of the SVP smartwatch will definitely make you stand out in a crowd with its cool, futuristic look. Convenience wise, having a smartwatch that works independently of a smartphone is useful, and it does all the things a smartphone can, such as browse the internet, send and receive emails, check social media updates, and is even able to make phone calls. That said, the sound quality of the phone calls leaves a lot to be desired, and can sound crackly, too quiet or distorted. The camera and video recorder are nice features and well positioned; considering the size, they take good-quality shots.

The smartwatch does not come with appstore or Google Play, but it does have Aptoid, which is its own dedicated app store. However, choice is somewhat limited; some apps do not function correctly, due to its  fairly low resolution screen. The WiFi is temperamental: it can be slow, and is often unable to connect properly, especially if the watch is out of range, or not close to the router. The battery-life can be on the short side, depending on what you are doing on the watch (browsing or downloading will significantly reduce the battery) .

All in all, the smartphone watch is a useful device for people on the go; however, its inconsistent WiFi, poor sound quality, and lack of apps means that the watch still has a fair way to go.

What Others Are Saying

“I highly recommend it for techies, however , for other consumers id say wait till they perfect the smart watch.”

“It functions as you would expect a smartphone to function. All of that on your wrist! This is a prelude to the next generation of even smaller smartphones.”

“I’ve had the watchpone for about 6 months and I have to say I am very pleased with it. Appstore will not work but it comes with Aptoid another market store and I’ve found all I need on this.”