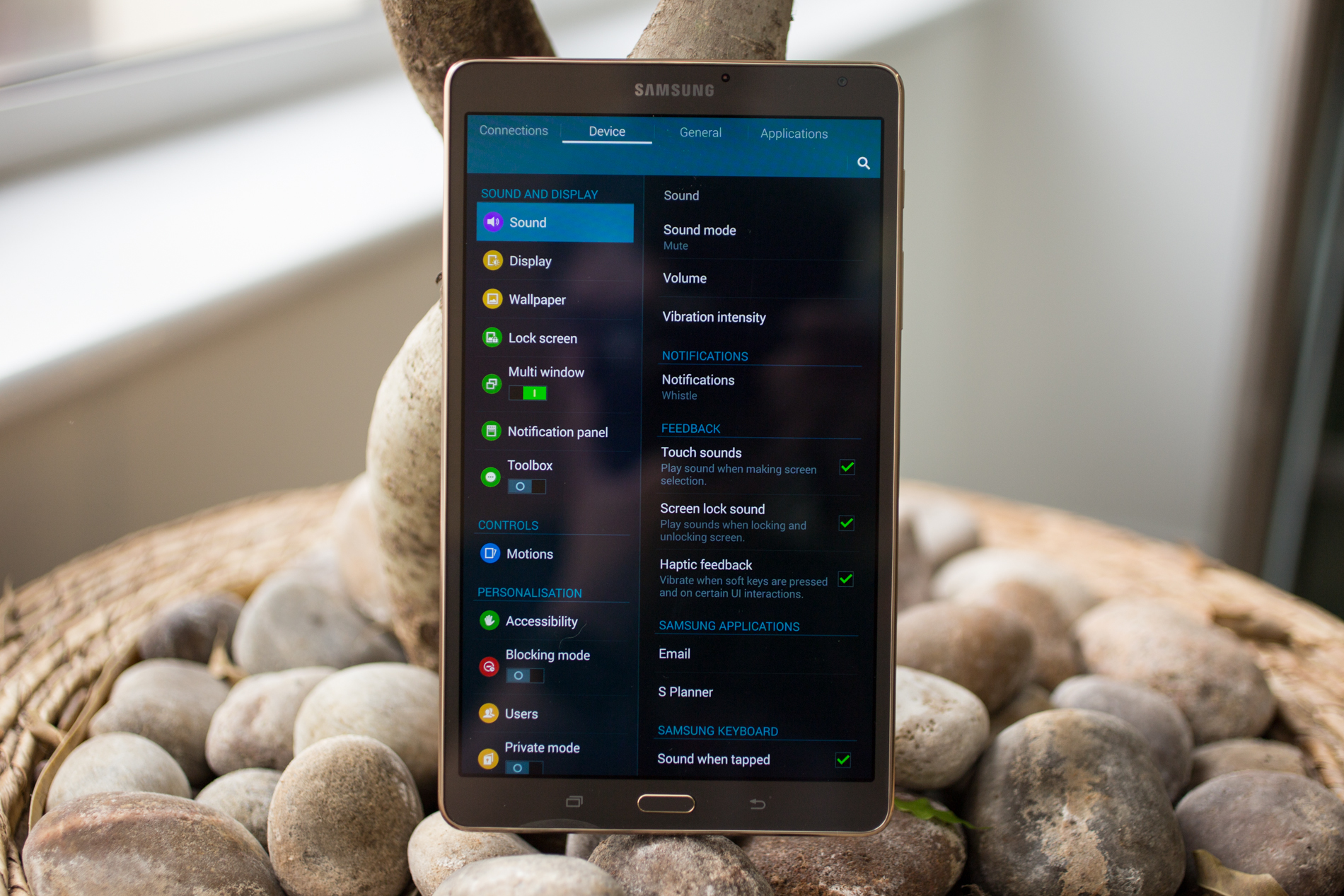 If you do this on the Tab Pro 4, you will see two new storage devices on your PC: “Card”and”Tablet.””Tablet”is the internal storage (16 GB) that comes with the device don’t mess with it.

“Card”is the external microSD card that you can install, and add files to from your PC.

If you go about changing folder and file names you didn’t add, you can screw up your device. When you are connected to a PC by USB, the Tab Pro 4’s battery will not be charged. So you should have the Tab Pro 4 fully charged before attaching it to a PC by USB cable.

-Kies Samsung Kies is software to install on your PC or Mac which enables you to connect safely using a USB cable to update firmware, synchronize files, and transfer data much faster that Bluetooth. You can also synch with your PC’s Windows Media Player (but forget synching with Apple iTunes Apple just won’t cooperate with Samsung or Google in any way.)

You use the latest version For the Tab Pro After you install Kies, it will ask you to download a Samsung Kies USB driver that will increase the speed of the connection. When you use Samsung ‘s Kies software to connect your PC by USB cable to the Tab Pro 4, you won’t see the Internal and external storage drives.

Kies will perform firmware upgrades, and while doing so, you can’t use the device for anything else. However, if you are just transmitting folder and file, or synching, you can simultaneously use the Tab Pro 4 features and apps. Using Kies makes transfers safe, and it knows where to put your music, pictures, and videos. For those files and folders, Kies will give you a choice whether to store on the internal storage or external microSD card.

Samsung’s default screen settings are a little too dim for my tastes. The Tab Pro 4 really shines with blazing, vivid colors at slightly higher brightness levels.

The downside to increasing the brightness level is that the screen (which is the primary culprit in battery usage) depletes the battery faster. White is the color with the highest battery drain (white requires all color pixels to be on). So the use of white backgrounds should be eliminated or minimized. I created a wallpaper that is just a totally black rectangle (stored as a. jpg file).

The black wallpaper allows images on the screen to stand out better, even at reduced brightness levels.

I also set my Kindle app to”white type on black background”for the same effect. Finally, I created a lock-screen which has my logo on it on a black background. Clearly, the Tab Pro 4 is positioned to compete aggressively (both feature and price wise) with the Apple Retina mini-iPad. Excellent, very sharp images on the display (depending on the resolution of the image itself).

This is the type of display that you only want high-definition images on.

All Android devices can multi-task, but you can normally only view one screen at a time for any running app. The Tab Pro 4 allows up to four multi-tasking apps to be displayed simultaneously, and you can pair any two so they always show up together.

This is a great feature for comparing two documents side by side, organizing files into different folders, or displaying a graphic in a separate window while browsing a document. It is a big step that brings much of the power of the PC display to the Android Tablet.

Here the edge clearly goes to the mini-iPad Retina with a 6, 470 mAh battery to the Tab Pro

The supplied Samsung USB Battery charger is rated at 2 amps, which is designed to rapidly recharge the device. Don’t use any battery charger with less than a 2-amp capacity (which would include most cell phone charges) they won’t charge rapidly, if at all. The same goes for the included Samsung USB cable it is designed to handle a 2-amp load on recharging. Other USB cables may not be able to handle a 2-amp current..

And the Tab Pro 4’s rear camera has flash, which the mini-iPad Retina doesn’t. Both have auto-focus. Neither have an optical zoom. GPS The Tab Pro 4 has a fully functional on-board GPS. And it is fully compatible with Google Maps and Google Earth.

The Apple mini-iPad Retina does not have GPS. SOUND The Tab Pro 4 has stereo speakers on the bottom (same as the min-iPad Retina.) Surprisingly good sound comes out these tiny speakers no deep bass, but good enough to listen to movies and music without earphones.

Put on some HiFi earphones for the best sound, or plug into some quality big speakers with a woofer for that big bass component.

At first glance, the included Samsung music player (simply labled”Music”) appears to be just a plain, simple, featureless music player. But it is actually a very understated, but feature rich, player. I mention it here because it would be all too easy to prematurely dismiss it.

You access the features from the Music screen by tapping on the small”Options”icon (three vertical dots) in the upper right corner of the screen, and then tap”Settings,”and then”Player.”It would have been better (and much more noticeable and convenient) to have these in tabbed folders directly from the player screen, but it is what it is. The options under “Settings > Player”are:

SAMSUNG The included Samsung apps for the Tab Pro

It may be debatable exactly what the best hand-held thing on the market is now, but the Samsung Galaxy Tab Pro 4 is right up there at the top feature wise, and price-point.

I, as a rational engineer, would pick the clearly superior Samsung Tab Pro 4 over the Apple Mini-iPad Retina. I bought one for myself. And my wife said she was going to upgrade to the Tab Pro 4 and abandon her Apple mini-iPad.  Samsung Galaxy Tab Pro 4-Inch Tablet full photos