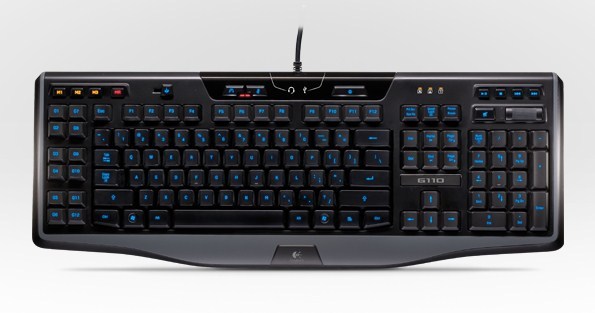 Average User Rating:
The G110 is Logitech�s current budget gaming keyboard. While it doesn�t have all of the features of Logitech�s other high-end keyboards, it packs the basics of a good gaming keyboard into a tidy � and less expensive � package. The keyboard is your standard USB 2.0 connected device, with some extra slots and macro keys to up the ante. It also includes a bit of customization that most gamers will find welcome additions. If you�re already interested in purchasing the G110, click here to see it on Amazon.

Buttons
The G110 has all of you standard buttons along with the number pad, but adds in a few extras. The top right has media buttons that allow you to start and stop your music, along with changing between songs. Also included below the media buttons is a mute button, and a roller that controls the volume of your system. The board also has twelve macro buttons on the left side. These can be configured to do complex macros or simple key presses, and can be set up on the fly. Above the macro buttons, you have buttons labeled m1, m2, and m

Customization
Because of it�s price, the G110 doesn�t have too much in the way of customization. There are a few features however, that are worth a note. Aside from the macro keys that can be set according to your preference, you can change the color of the led backlight. This is pretty standard now a days. As expected, the palm rest is removable. A feature I particularly like is actually underneath the keyboard. The bottom of the device has channels to route your keyboard, mouse, and other cords through to eliminate clutter that could ruin your game.

Extra Features
Again, the G110 isn�t the most feature-rich keyboard, but it does have a few upgrades. The top of the keyboard includes your headphone and microphone jacks so you can easily plug them into your keyboard instead of putting them back behind your machine. Also included on the back is a high-speed usb 2.0 port that�s intended for your gaming mouse.

The Verdict
For the price, the Logitech G110 is a great keyboard. It has the standard gaming features that some gamers require. It also adds a few nice touches for convenience. That being said, it�s just barely more than a standard keyboard with some extra macro buttons and media controls on the side. If you need to upgrade from the board that came with your computer, this is a viable contender. If you�re a serious gamer, I would pass and look at some of the other offerings listed on this site.

Where to Buy?
The g110 can be found online or in some specialty computer/gaming shops. A good vendor of electronic goods is Amazon. To see the Logitech G110 on Amazon, click here.