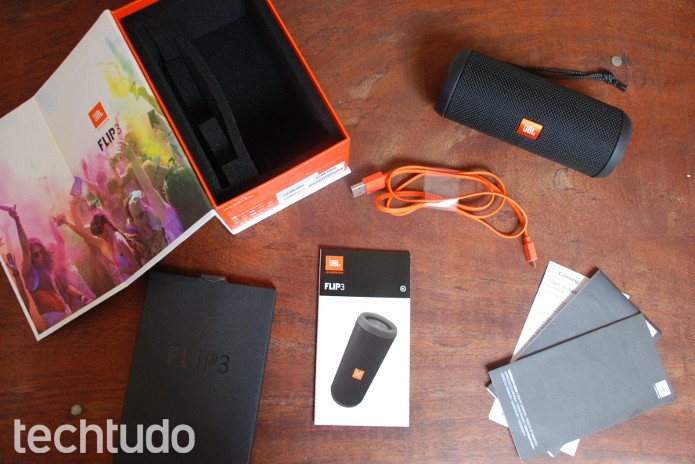 The JBL Flip 2 is the second generation of the Flip line. Although it may look the same as the original, this speaker has received several important upgrades that have overall improved the speaker to make it one of the best portable audio devices currently available. As the name suggestions, the speaker can be vertically or horizontally flipped without losing any sound quality or functionality. With a price tag of just under $100 this is a great choice. More on this speaker in the JBL Flip 2 review.

Design
If I wish to flip the speaker in either of two orientations, the audio device has mostly rubberized parts in the ideal locations so it will stay in place. I have found that the best orientation of the Flip 2 is vertically which offers a much smaller footprint. Also when sitting vertically, the physical buttons (call end/answer, power and volume) are much easier to see and access.
One of the greatest differences of the Flip 2 is the way in which it charges. With the original, users were required to charge the device with an AC adapter. However, the new model utilizes Micro-USB charging so it can be plugged into the USB port on a computer or utilizes the power adapter. This allows me to have an alternative option if there are no outlets available at the time of charging.
Additionally, this version has been designed to include Near-field Communication (NFC) tap-to-pair technology, which will instantly pair the speaker with another NFC-enabled device, such as a smartphone or a tablet, simply by tapping the two together. Although the audio device automatically pairs with an NFC-enabled device after being setup, it is a nice design addition.

Performance
From a performance standpoint, JBL has significantly improved the clarity of the speaking for playing music or listening on a call as well as the speakerphone for making calls. This version has the addition of SoundClear echo accompanied by noise cancellation technology to improve the overall sound and clarity. This is typically accomplished by using two microphones, one that picks up the background noise and “cancels” it and the other that picks up the user speaking.
Price Disclaimer
The speaking also boasts a power rating that is higher (2×6 watts) from the original Flip which had 2×5 watts. I did not see a significant difference in the power usage. As with the original, the Flip 2 is remarkably loud for its small size. Additionally, this speaker is slightly heavier than the original with a weight difference of 0.06 pounds. Regardless, the Flip 2 is still light enough to transport without weighing down my bag. Furthermore, as previously mentioned, there is no sound performance difference between playing the speaking vertically or horizontally, it is more of space and preference.
Pros
There are many pros to the Flip 2 that make it an improved portable speaker over the original Flip. These advantages include:
Boasts speakerphone capabilities
Comes with a nice looking neoprene carrying case
Designed to be oriented vertically or horizontally
Highly portable
Plays extremely loud for its portable size
Utilizes NFC tap-to-pair technology
Cons
Despite the many pros of the speaker, there are a few cons to be aware of including:
Poor battery life, around 4 to 5 hours
Slight increase in price from the original Flip

Conclusion
Despite the battery life being the weakest aspect of the speaker and the slight increase in price from the original, the Flip 2 has significant improvements and is one of the best portable mini Bluetooth speakers available on the market. With so many different speakers to choose from, the JBL Flip 2 stands out from the rest.