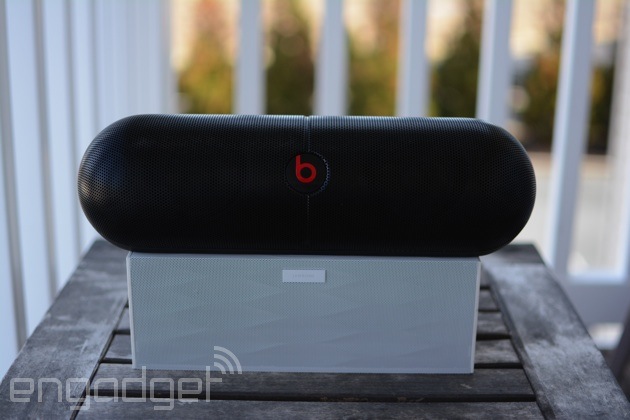 Convergence has been the overriding theme of the tech industry for the last several years. We’ve consolidated computers, digital cameras, GPS units and MP3 players into the smartphone. Other pieces of technology have helped to continue to push this trend of having one product work in a number of versatile ways. A lot of this has been driven by Bluetooth, and it’s had a key impact on how we listen to music. The Jawbone BIG Jambox is a cool little speaker that is surprisingly good. Read here our full Jawbone BIG Jambox Review.

Design
If you didn’t already infer it from the name, the Jambox is a speaker for listening to your music. That’s what the unit is at its most basic, but the reality is that it is so much more advanced than that. It’s about ten inches wide and four inches tall, and it pumps out incredibly crisp sound. It features an auxiliary input for plugging in a device, but the main appeal is its Bluetooth capabilities. The BIG Jambox has the ability to connect to your smartphone, tablet or other Bluetooth and music enabled device. From that point on, you can stream music to it without the need for cables.

This Bluetooth capability doesn’t just make the connection between your phone and speakers wireless. The BIG Jambox is itself able to operate without being plugged in. Jawbone designed the speaker to feature up to fifteen hours of battery life during continuous music streaming. With this ability, the BIG Jambox isn’t just a solution for listening to music at home. It’s a device that you can take with you wherever you’re at. Take it to the golf course, out on a boat or to the beach. No matter where you want to go and listen to your music, the BIG Jambox will come with you.

Another aspect of the BIG Jambox that makes it appealing is its design. From a product with such advanced capabilities, you might expect it to have a futuristic aesthetic. Instead, the speaker features a sort of throwback aesthetic. It’s shaped like a large brick, eschewing rounded edges and curves for flat edges and corners. This gives the BIG Jambox an appearance that lets it blend in with other speakers. However, a couple of things do tip off its modern nature. There are controls for your music on the front, with functions for skipping tracks, adjusting volume and playing or pausing your music, as well as controls for calls. On the right-hand side of the unit, you’ll also find the on and off button as well as one for pairing. The BIG Jambox audibly calls out when it’s placed into pairing mode, and makes intense sound effects for powering on or powering off. Surprisingly, these modern touches do a nice job of complementing the retro aesthetics.
It’s hard to find a downside to the BIG Jambox, but if there has to be one then it would likely be the size. Part of the appeal of Bluetooth is portability. It’s definitely portable and has the battery life to back it up, but given it’s dimensions it’s not going to fit comfortably in a lot of places. The smaller Jambox might be the speaker of preference if the goal is to stash it away somewhere.
The Verdict
Aside from that, it is very tough to find flaws in the BIG Jambox. It pumps out sound with a ridiculous amount of volume and crispness, and the battery life is fantastic. If you’re considering a Bluetooth speaker, it’s nearly impossible to go wrong by choosing this offering from Jawbone.
Read here our review on the Bose SoundLink II.